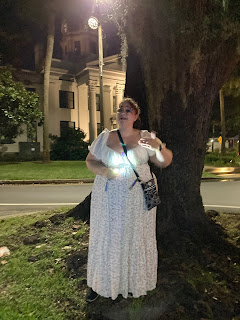 Cold rushes of air. Faces peeking out of darkened windows. Objects falling, unexplained, to the floor.  Strange “orbs” of light, either seen with the naked eye or in photos.  And that mysterious, unexpected feeling that sends chills up the spine. You never know what might happen on a ghost tour.

Whether you are a believer in the supernatural or just love a good tale of hauntings, October is your month for things that go bump in the night.

And as Halloween approaches, ghost stories are a main attraction in Monticello, Fl., located about 20 miles east of Tallahassee.  The city is named after the Virginia estate home of Thomas Jefferson, and the Jefferson County Courthouse at the center of town is modeled after Jefferson’s Monticello.

The picturesque town also takes pride in being called “the most haunted small town in the South.”

This tiny historic village with its moss-draped trees, stately Victorian homes, creepy old jail, an 1890 opera house, and a meeting tree is home to once-a-month weekend walking tours, filled with ghostly tales. In October tours are held every weekend, culminating in a three-night Halloween event.

The Historic Monticello Ghost Tours are a combination of history and stories about the places and people who lived and died in Monticello, says Linda Schuyler Ford, tour coordinator and nationally known storyteller.

"Schuyler" is well-know to members of the Florida Storytelling Association, having served on the board of directors and being active in the FSA annual festival. She was a featured tellers and workshop presenter at 2021 festival. Schuyler grew up in New York's Hudson Valley where folktales and stories like Washington Irving's “The Legend of Sleepy Hollow,” were early influences.  She says that as a child she loved Irving’s tale of a headless horseman that menaces the schoolmaster Ichabod Crane.

Schuyler is familiar with the Old Dutch Church (the haunt of the headless horseman and final resting place of some who inspired characters such as Katrina Van Tassel and Brom Bones). Schuyler eventually became a tour guide for several years at the adjacent Sleepy Hollow Cemetery in New York.

She has been conducting tours and training volunteer tour guides in Monticello since 2018.

She says “I had no staff, no guides to work with that first year, so my storytelling friends bravely and generously stepped up to help, including Pat Nease, Robin Schulte, Paul Phelps, Rose van der Berg and Margaret Kaler.”

“As storytellers, they were quick studies, knew how to read a crowd, and offered the delicious benefit of offering traditional spooky storytelling performances.”

Now that the tours have gained traction, she hopes to add more storytelling in the future.

On a recent visit to Monticello, Schuyler was coaching a volunteer who called herself Agatha Christie.  Dressed in Victorian garb, Agatha guided the tour through several stops as a full moon peaked through the clouds. She told of spirits such as a “Woman in White” which has appeared in the window of a historical mansion.

During October hundreds of visitors traditionally take the tours, so         several guides are needed.

The Friday night tour is a two-hour jaunt through the town and the       Saturday night tour takes place in the city’s Roseland Cemetery,   established in 1847.

The tours begin at 7:30 pm at the Monticello/Jefferson County   Chamber of Commerce, located in a small 104-year-old former   Catholic Church, which like every other building in town, might be       haunted. The tours are fund-raisers for the Chamber.

In addition to the regularly scheduled tours, the HMGT Halloweekend VIP package offers activities from 7p.m .Friday Oct 29 through 9 p.m. on Sunday Oct 31.

Guests can choose from at least four tour times. Included will be a tarot reading, a paranormal investigation workshop, and a “Macabre Magick” experience with spooky storytelling added. More surprises are planned, including the first annual HMGT town-wide Scavenger Hunt, with several prizes. The VIP Halloweekend tickets will be limited to just 25 guests (cost is $75 per ticket).

Other Halloween storytelling events include:

The Storytellers of Old Tampa Bay will be doing a full Halloween show at the Historic Tampa Theatre, Oct. 27 at 7 p.m.  Admission is $10 for an evening of scary stories around the campfire under the historic movie palace’s iconic star-lit sky. It’s a family-friendly program of PG tales appropriate for all ages (who don’t mind having a chill sent down their spine). Campfire Stories - Tampa Theatre