On the weekend before Thanksgiving, the celebration of telling stories has become known as Tellabration. This is a worldwide event!

Search for a Tell-a-bration event happening THIS WEEKEND in your area.
Check out the Florida Storytelling Association online calendar:
https://flstory.com/calendar/

According to the National Storytelling Network:


TELLABRATION!™ is a worldwide evening of storytelling. It creates a network of storytelling enthusiasts bonded together in spirit at the same time and on the same weekend.
TELLABRATION!™ originator J. G. Pinkerton envisioned this international event as a means of building community support for storytelling. In 1988 the event was launched by the Connecticut Storytelling Center in six locations across the state. A great success, TELLABRATION!™ extended to several other states the following year, and then, in 1990, expanded nationwide under the umbrella of the National Storytelling Network (then called NAPPS, and later the National Storytelling Association).
In 1995, for the first time, there was a TELLABRATION!™ in Japan, brought there by Japanese storyteller Masako Sueyoshi, who had been a part of TELLABRATION!™ when she lived in Connecticut for several years. By 1997, there were TELLABRATION!™ events on every continent but Antarctica. (Anyone know any good penguin storytellers?)
TELLABRATION!™ is traditionally held on the third Saturday in November. Some events, however, may be at an alternate time during the same weekend.
Anyone can produce a TELLABRATION!™: storytelling organizations and centers, schools, libraries, colleges, museums, performing-arts centers, story-swap groups, story enthusiasts, and others.
NSN serves as a partner to producers and a clearinghouse for information. NSN publicizes TELLABRATION!™ events worldwide and offers a Guidebook and Promotional Kit for producers.

Posted by Florida Storytelling Association at 4:25 PM No comments: 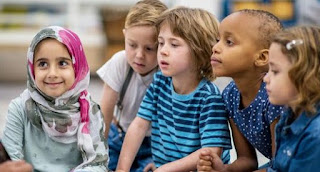 When I retired almost 20 years ago, I started volunteering in the elementary
schools by telling stories to various classes to encourage reading. To emphasize
how important I thought it was to enjoying reading, in my first meeting with each
class I would point to my watch and say “Do you see what time it is? This is the
time I usually take my nap, but instead I’m here to help you see how much fun
reading can be!”
Before I started volunteering, I built up my repertoire of children’s stories. Some
of the best resources are the “Ready To Tell” books. I still use many of those
stories today, including some for adults. The stories all fit in the time period that
a Teller needs (6 to 10 minutes), the authors give recommendations for the age of
the audience for which the story would be most appropriate and they also give
hints for how to tell the story.
The web site “storybee.org” is an excellent site to find stories for all ages. The
home page has links to four age groups of students. When you go to the age
group you are interested in, there will be a list of stories, the time each story lasts
and the artist. You click on the story that interests you and hear the artist tell the
story. There are many stories for each age group. For instance, the 4 to 9 age
group has over 140 stories.
You can find an endless number of sites that will spell out stories when you
Google the type of story you are searching for, i.e. folk tales, adventure stories,
love stories, pirate stories etc., etc. In my experience, I have found the above
listed sources to be most satisfying.
For years I only told stories in the classrooms. I would tell something about the
story to set it up, tell the story, then talk about the story and generate questions
about the plot, characters, likes and dislike about the story. One day when I was
visiting my family in Pennsylvania, one of my grandchildren was reading a story to
me. He went along in a dull monotone, just saying words no matter what was
happening in the story. I asked if we could alternate reading and, since I am a real
ham anyway, I read very excitedly. He caught on and really got into the story.

Now, before I tell, I first read a story to the class with lots of expression and
animation to give the students an idea of reading in the same way. I believe that
it is very important that when you are preparing to read, write down any words
that the students might not know and decide on a definition that they can easily
comprehend. If you are going to work with the same classes, that is if you will
read/tell to the same classes, explain some of the terms that define a book. Front
(cover), back, head (top), tail (bottom), spine, endpapers (page glued to the front
and back covers). It can be fun as well as informative. Show how the author
sometimes uses the endpapers to tell you something about the book. Generate
discussion by asking what the cover makes you think the story is about. As you
read, when it is appropriate ask what they think is going to happen next. If it is a
picture book, always hold the book so that they can see the page that you are
reading and make sure you rotate the book to insure all of the kids see the page.
If you asked me what one thing helps the most in telling to Elementary School
students I would tell you to embrace being silly. I sometime just mispronounce a
word that kindergartners know and they think I am the funniest storyteller in
the world. Many of the stories you will tell to this age group involve something
humorous or silly. I practice in front of a mirror when a story involves witches,
animals ogres etc. One story that I tell has three witches and it took me awhile to
come up with three different voices and facial expressions to distinguish between
them. Of course it helps if you have someone who can listen and critique to firm
up the storytelling. One thing I have learned is to always wrap up all details of a
story. For instance, in the “Belly Button Monster”, say that the monster says he
will leave Florida forever. Or in “Jack and the Robbers”, say that Jack’s father tells
the animals they can live on the farm now. If you don’t, you will be asked “But
what happened to…”

If you go to a class on a regular basis, you will know what a rock star feels like.
The kid will love you and you will love them. There is a wonderful feeling when a
child comes up to you and tells you what they have been reading. And, of course,
they will tell you that you are the best storyteller ever! 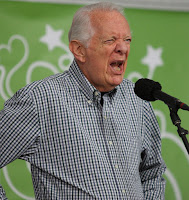 The uber expressive, marvelously talented Pete Abdalla lives in Orlando, FL, and delights audiences all around the state. You can catch him in Mt. Dora, January 23-26, 2020, as he will be one of the Florida Storytelling Festival's featured performers.
Posted by LindyGardens at 9:55 AM No comments: