The Healing Aspects of Storytelling

It should not be a far stretch for one to recognize the therapeutic benefits inherent in the use of stories.  After all, storytelling is one of the oldest and most powerful teaching and learning methods used by humans.  And who, as a child, did not have their behavior and emotional responses redirected through stories such as The Boy Who Cried Wolf, The Little Red Hen or Henny Penny?  Through these stories, the cultural importance of not raising alarm over nothing, sharing in the work to get the reward, and not to believe everything one is told was passed on in a more pleasing, entertaining and acceptable manner than had we been directly taught or scolded.   Through what appeared to be simple folk tales, we were given sage life advice while chuckling at the silliness of a hen who believed that indeed, the sky was falling.  And hopefully through these stories, we were readjusting the way we acted in, and responded to, the world around us.

While listening to stories has great value, the telling of one’s story has also long been believed to therapeutic.  Journals and diaries have been written for centuries, with the authors finding insight and catharsis in documenting the activities, thoughts and emotions of the day.   Even the practice of psychotherapy had its roots with the father of psychoanalysis welcoming patients to his fainting couch to tell the stories of their mothers!

Through the 1970’s, developmental psychologist Howard Gardner, best known for his theory of multiple intelligences,published several professional articles documenting the therapeutic benefits of telling one’s story.  And while it’s beyond the scope of this blog post to cite all the specific publications, there are studies documenting that the telling of one’s story increases self-esteem and self-confidence, modifies negative behavior patterns, increases concentration, improves mood, and has benefits for dementia.

The power of telling one’s story was captured for me so notably through the life of my friend, Dana.  When I met Dana, she pretty quickly revealed that she did not celebrate Halloween.  As the friendship deepened, Dana shared that the reason that she did not celebrate Halloween was because on Halloween night of her 10th year, her older sister had a terrible fight with her parents, packed her bags, and never returned home.  For Dana, this night that should have been filled with the glee of costuming up and giving herself a bellyache from eating too much candy, became her defining moment of family trauma.  For years Dana sat alone with her story, with each Halloween bringing angst and depression.  Dana was sure that this holiday was filled with sadness and despair for her parents and siblings as well.  It was definitely not a night for revelry; in fact, yearlyit set Dana up with mood struggles that persisted until spring.

After years of friendship (and therapy), Dana was coming to spend some time at my house and had decided that during our visit, she was going to meet her long estranged brother for lunch.  During this meetup, Dana intended to talk with her brother about Halloween and all the terrible angst that holiday brought up for them.  On the day of disclosure, I dropped Dana at the specified meeting place and came back a couple hours later to find a befuddled and confused friend.  Come to find out, Dana’s brother not only had no recollection of that fateful night, but actually quite enjoyed Halloween.  In the sharing and processing her story, Dana was able to step back from all that her story had taken on in the years of not telling it and start to let herself see the night differently.  And Dana was able to start on her journey of being more present to, and content through, her winters.

So now the challenge is yours.  Which of your stories is waiting to be told?  What healing is yours for the finding?  Accept and tell your story.  It’s what it is. It’s made you you.  Some of it was out of your control.  For some parts of it, you might need to make amends.  For a quite a bit of it, you probably didn’t give yourself nearly enough credit.  So own it.  Tell it.  Let’s see what happens… 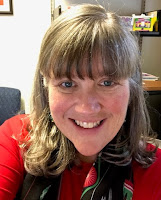 Dr. Christine Chew has been helping children tell and gain mastery of their stories for the past 20 years in her work as a Pediatric Psychologist.  While she has lived in the the Northeast, the Midwest, and the Pacific Northwest, she most comfortably finds home with her partner, son, cat, two tripod dogs, and 26 chickens on their expanding homestead in Central PA.
She enjoys listening to storytelling on Zoom and in person,
Posted by LindyGardens at 2:18 PM No comments: