Timely Insights From the Executive Director of the Healing Story Alliance

Is there a human  being on this planet who is not, to some  degree,  wounded—physically or emotionally—or in  fear of becoming  wounded or still experiencing  the effects of a  past wound or threat?

Some people say all Stories are  actually  healing stories. Indeed,  virtually all stories have  healing elements. Every  story  that is told, orally or  via sign or image,  entails an interaction between a  teller  and  audience (whether  an audience of one,  ten, or  thousands!) This is an  active  exchange that provides  gifts to both tellers  and audience. These  gifts  are  elements of healing,  such as

·         A  recognition of one another as humans with  vulnerabilities and  dreams

·         Sharing in  ways that  resonate and contribute to understanding  and  resilience

·         Affirmation  that the  experience  of telling and listening are  rewarding ( informing,  educating ,  entertaining,  reaffirming humanness!)

Healing Story  is a  way for humans to convey compassion and understanding in support of  Resilience and empowerment  for a  person,  group, community or the entire planet,  that is suffering from a  wound.  A story may not cure the wound, but may make it more understandable and hence more  bearable by showing that the pain or  grief is heard or recognized. Healing  stories may  reawaken belief that things can  get better, obstacles  overcome, justice achieved, cruelty  confronted,  possibilities opened.  The stories may also offer alternative ways of looking at a situation, sometimes educating, sometimes  reassuring or refocusing. Often the  message  is “You  are not alone or trapped in an impossible place.”

Many stories  follow the arc of “the Hero’s journey”, in which   an individual is  called to take  actions, go places, encounter helpers who may offer   advice or empowering gifts, overcome  dangers and challenges, eventually  achieving a  success that provides rewards and new  knowledge/ awareness with which  he/she returns with new  ability to  use this in  beneficial ways.

That  story  arc may or may not  focus on a heroic  figure who is  suffering from a wound,  although in the course of the journey wounds  and  dangers  are likely occurrences. But the journey experienced by the listener/ audience is  healing—it comforts, reassures, supports imagining of  wonderful possibilities and achievements  and can  alleviate doubts and pain, at least for the moment. The  story’s protagonist acts bravely (exhibiting courage in the face of  fear) even  though  sometimes that  bravery may  seem to come  out of  ignorance or  foolishness. The listener identifies with the  character, even as the character  may stumble into   deeper  troubles  that call for  further  reliance on the resources within his/her  grasp..

The wounds  we  experience come in all sizes and shapes—from a sprained ankle to a broken heart, from a lost  ring to a  famine, from a child being bullied to institutionalized  racism,  from loss of  a job to collapse of an entire  economy,  from a common cold to a  devastating pandemic.

In all these cases, stories may not cure, but can awaken ways of looking at them and assisting in finding  the best ways to act  within the  situations.

Stories may not prevent anxiety and impatience, but might offer options on how to find and  use inner  resources  to discover the  best  ways through difficult  situations.

Stories may not  reduce  feelings of loss  of loved ones, of home,  or  the  frustration at   finding that one’s  beliefs in fairness and justice are being  denied and abused, but  may encourage  identifying resources and supports that  can help respond to the  feeling of woundedness.

Some times, major  crises such as wars, fires, natural disasters, famines or plagues (!) leave many  people  experiencing loss, confusion, and anxiety over what might happen next. This was certainly true after  9/11 brought down the  World Trade Center  Towers and brought  in  a time of  fear and mourning.. Yet  at that same time  stories  of resilience, heroic acts, kindness,  and hope  made the situation more full of possibilities, more  strands of hope for   people to grasp and  begin to rebuild their  sense of  a future. Fears  were  acknowledged,  shared,  and  ways  were sought to  overcome and move past them. Resources  aimed  at  helping children better understand the  world they were experiencing,  and  offering   stories of  generosity and resilience, were developed. (See  the Resources on The Healing Story Alliance Website, especially   Stories  for Children in Times of Crisis compiled by Laura  Simms).

Of  the many many  stories  that  could  be told as examples of  Healing Stories in times of  crisis, where the  right story at the right time can open eyes and hearts,   I  offer  this brief tale, which I first heard  at  a prayer  service  not long after  9/11.  The story’s origins go  back many hundreds of years.

A king had a  favorite jewel, one he proudly wore on a chain around his neck,   showing it  to admirers pointing out the way  light radiated from each point on its surface.  But one day  the jewel  fell from its casing,   landing on the   hard floor with  a loud thud. A crack  appeared on its  surface. The king was   terribly upset. His prize  was no longer perfect.  He called for  the  best  artisans in his kingdom  to come up with a solution for  restoring the prize to its  perfect state.  One suggested simply  reversing  the jewel in  the casing, so the crack would never  be seen. Another suggested  filling in the  crack with  a glue, then sanding down the surface.  These were not acceptable  solutions. A young  artist   stepped forward and boasted that if  given the jewel for  two  days, he would   return it and the King would surely  be pleased with   the result. The king  gave him  the opportunity, with a warning of dire consequences if he failed.  He returned  as promised, two days later, and handed the  gem to the king.  At first glance it was clear that the crack was still there.  But the  artist had  etched the surface  so that the crack had  become the trunk of a  tree, from which branches, leaves and flowers  emerged. The work was   beautiful. Indeed, the king was pleased, for  what had happened was that  rather than attempt to restore something after  damage,  the wound was turned into an opportunity to  build something  even more  special.

Most  recently, Healing Story Alliance has  been conducting  weekly “zoomed” gatherings of tellers and other  story users. These  gatherings, under the  heading “Keeping the Oars in the  Water”  apply  the  metaphor that in turbulent waters, keeping the oars in the water enable the  boat to be kept on a stable  course heading towards  safety. These weekly gatherings have provided a place for members of the storytelling community to share their experiences,  cares, and  vulnerabilities in a safe supportive space. The stories emerging there are not performance oriented, they are expressions  given  from a place of  generosity and hope, providing   moments to pause , reflect, and renew.  It is there that the essence of  Healing Stories can be found. 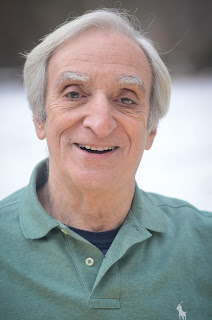 Mike Seliger has been Chair of The Healing Story Alliance’s Executive Committee for over six years. He holds a doctorate from The City University of New York in Sociology and has also studied mime, clowning, and storytelling. A retired Dean for Planning at Bronx Community College, Mike has devoted most of his life to community organizing and empowerment through education. He has written and edited extensively as editor of Mime Times, the New York Storytelling Center Newsletter, and Broadway Local Community Newspaper.

Posted by LindyGardens at 4:17 PM No comments: