The Upside of Zoom

How I Learned to Love Zoom during COVID

Nothing beats a live audience when you are telling a story. Personal group interaction has been missing during this pandemic.

We miss those live, in-person storytelling events that have been shut down for more than a year now. As we struggled to find venues this past year, many storytellers turned to Zoom.  On the Internet, some of us faced a new learning curve.

We had to remember to “unmute.”  We had to figure out where to look, or where not to look. Those of us who are technology-challenged also had to grapple with lighting: “The glare off your eyeglasses is distracting” “Say, what’s that glow behind your head?”

Some struggled with camera angles: “Sorry, but your chin is out of the frame.”

We had to get used to looking at a computer screen filled with little heads in boxes – like a giant-sized version of the old game show “Hollywood Squares.”

But there has been an upside to all this. For me, personally, this COVID year has brought new friends, new discoveries, and new experiences – all thanks to Zoom.

I turned my dining room into a little Zoom studio. I recovered a large piece of plywood, free from a local mobile home factory. I coated it with “green screen” paint from Home Depot. And by using Zoom’s visual effects, I can change backgrounds.  For example, when telling the origins of “Spanish Moss,” I can appear to be under a moss-laden oak.

I also learned that by hosting my own self at a Zoom meeting at which I am the only attendee, I can record and practice my stories, over and over again.

But the greatest, most wonderful thing about Zoom has been the ability to meet storytellers from around the world. 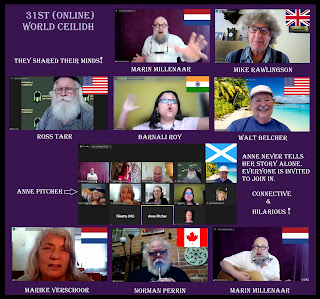 On Sunday mornings, for example, I often join the World Ceilidh, a group of tellers, poets and musicians from throughout the world. They are brought together by Marin Millenaar, a jovial storyteller, musician and tram driver based in Amsterdam.

It’s been wonderful sharing experience with tellers like the charming Rona Barbour from Ireland, Barnali Roy from India, Alastair Daniel from London, and Cathy Crawley, a former schoolteacher from Texas who now lives in Sohar, Oman.

There are many more, including the delightful Scottish teller Ann Pitcher who sketches participants every week (but still refuses to draw me like Cary Grant).

Thanks to Zoom, I get to spend time with renown storyteller Tim Tingle and the merry band that joins The Doc Moore Storytelling Guild on the third Thursday of every month.

Originating out of Austin, this swap session is one of the highlights of my storytelling experiences. It’s just pure fun to spin yarns with this group which honors the memory of the legendary Texas tale-teller Doc Moore. 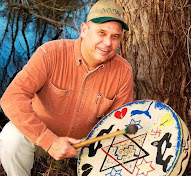 But I also enjoy Thursday afternoon Zoom sessions with the Georgia Mountain Storytellers, hosted by two fine storytellers Alex Peers and Kanute Rarey.   They welcome ideas and stories from beginners and the experienced.

Zoom has also allowed me to join the WRAPPS 2nd Wednesday story swaps out of Cincinnati, Ohio, featuring friends and members of the Western Reserve Association for the Preservation & Perpetuation of Storytelling.  And I’ve dropped in on the Montreal Story Tellers Thursday night sessions out of Canada.

One of the more unusual story swaps I’ve found is the 99-Second Challenge, a monthly competition on Zoom in which you try to tell a true, personal story in 99-seconds. Created by Sean Wellington, it tests your ability to boil a story down to the essentials. I’ve tried several of these over the past year and made it to Grand Finale Challenge.

Another upside of Zoom is that I’ve been able to watch several state storytelling festivals as well as online performances by some of the best tellers in the county such as Shelia Arnold, Jeff Doyle, Andy Offutt Irwin, Tim Lowry, Antonio Rocha, Bil Lepp, Anne Rutherford, Norm Brecke, Ingrid Nixon and others.

On Zoom, I watched the National Storytelling Festival last year as well as a few state festivals such as those in Alabama and Georgia. I would never have been able to travel to all these in person. And with Zoom or Facebook Live recording, you can attend every workshop and every performance.

And while I really long to tell stories in-person before an audience, I’m going to miss all the tellers I’ve met on Zoom if these online sessions go away.

Walt Belcher is a former feature writer for The Tampa Tribune who started storytelling in 2018.

Posted by Florida Storytelling Association Blog at 8:37 AM 1 comment: